Posted by Barbara Carr | Updated 2021-01-29
Broxtowe residents are being encouraged to sign up to a new Go Green Challenge as part of the Borough’s efforts to tackle climate change.

The challenge, run by Broxtowe Borough Council will bring weekly email challenges to residents over the course of six weeks to help families be more green in 2021 and beyond. Residents can sign up by visiting: www.broxtowe.gov.uk/gogreenchallenge

David Watts, LibDem Vice Chair of the Environment and Climate Change Committee at Broxtowe was instrumental in bringing forward a new Climate Change and Green Futures Programme of which this forms part.

Bramcote councillor Hannah Land has been elected as the new Local Party Chair for Broxtowe Liberal Democrat’s. Hannah takes over from Brian Taylor who has served as chair for the last three years. Cllr David Watts is the new vice chair, and Cllr Barbara Carr is the treasurer. Trish Taylor remains as the secretary.

Liberal Democrats not standing in Broxtowe

As reported in the Nottingham Post, the Broxtowe Liberal Democrats will not be standing in the 2019 General Election.

Zero Carbon Broxtowe is a radical policy paper produced by Broxtowe Liberal Democrats setting out our vision for how we can bring about a cleaner, greener borough.

Lessons from the Brecon and Radnorshire by-election

Broxtowe Liberal Democrats are much heartened by the party’s dramatic victory in this week’s by-election in Brecon and Radnorshire.  In Westminster, the government’s slender majority [including the DUP] is now a single seat, reducing the likelihood of an early no-deal withdrawal from the EU.  Jo Swinson, our newly-elected leader, now has additional support in the Commons in the shape of the leader of the Welsh Party, Jane Dodds, who overturned an 8000 Conservative majority to win by nearly 1500 votes.

Two particular features of the Welsh by-election - the situation of the sitting MP and the negotiation of electoral pacts – can be seen reflected in our situation here in Broxtowe, and will guide our strategy as we prepare for the possibility of an early General Election:

The new corporate plan for Broxtowe is currently in development. Public consultation will be opening soon.

County Councillor Steve Carr in clash over travellers in Broxtowe

BBC Local Democracy Reporter Kit Sandeman describes here an angry clash in the County Council Chamber this morning between two councillors who both also sit on Broxtowe Borough Council.
Steve Carr [the only LibDem County Councillor] demonstrated his disgust by walking out when Conservative Philip Owen used the term 'biblical plague' to complain of travellers who were holding a horse fair in his Nuthall Ward.
It's not the first time the two have clashed: both are accustomed to expressing their views forcibly in debates.  Both would have earned rebukes by Speaker Bercow [as has Anna Soubry our MP] if they had had been in the House of Commons.

Party politics normally doesn't feature, but committee members may well be brushing up on their animal rights policies as the issue has been aired nationally in The TIMES. 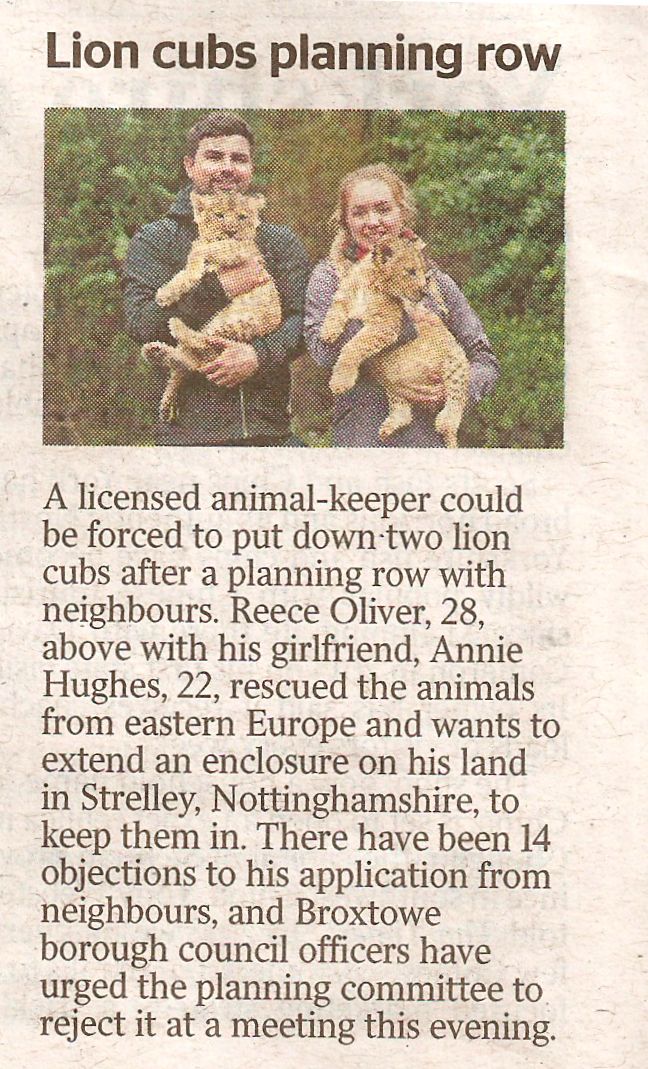 Update [June 27]: David Watts' committee overturned the officers' recommendation last evening and granted permission for the wild cat enclosure.  The villagers who were opposed to the project [on Green Belt land between a bridleway and the M1] had procured a last-minute offer from the Born Free Foundation to house the cubs. The applicants were determined to keep them but guaranteed to demolish the enclosure on the lions' death or removal.

See the BBC News coverage of the meeting here. 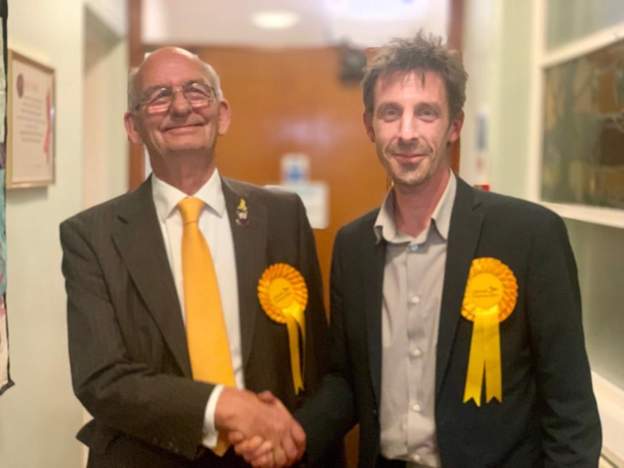 David Grindell and Tim Hallam have been returned as Broxtowe Borough Councillors in a closely fought by-election on June 13. The by-election was caused by the death of a Conservative candidate during the May 5 election campaign which had left Broxtowe Council in no overall control.